Right – so this post was originally scheduled as “MT’s Birthday Post” – but I’m turning 41 next week and that seems like an insignificant one. Like it’s really just an extension of 40, the age equivalent of the people who stay too long when they’ve worn out their welcome. Now, don’t get me wrong. I am grateful for every year and the blessings that come with more time learning and exploring on this planet. I guess, now that I’m in my 40’s, it just doesn’t feel that monumental. So, instead of writing about life (which I always do in my monthly personal note to my community), I’ll talk crackers. Not just any crackers, though. These are the best, best, best gluten-free crispy crackers I’ve ever made.

I’ve been cooking from scratch and developing recipes since 2007. There are recipes I know from the get-go are sure things. Baking, for me, has never been a sure thing. I mean I love it. I probably love baking more than cooking as far as creative activity goes. But very rarely do I start a baking recipe without any frame of reference and score a home run with it on the first go.

These gluten-free crispy crackers are one for the books. I used, what in North America at least, are considered very alternative flours. Forget quinoa and brown rice. I’m talking tigernut and green banana flour. Why use straight-up water and more flour when you can use sorghum sourdough starter discards? Let’s throw in some psyllium, and then for extra crunch and flavour, a whole whack of sesame seeds, sunflower seeds and pumpkin seeds.

That is just how this went. I have actually been using both green banana flour and tiger nut flour quite a bit as I aim to bring down the grain level in my sourdough breads. I also had a whole bunch of sourdough discards and have been seeing creative recipes cropping up in my feed for fun uses for it.

Have you tried either of these aforementioned flours yet? Here are some fun details about them and why they’re worth giving a try:

Green banana flour is made from dried and milled green bananas. It’s a newer flour to many of us in North America, but it’s commonly used as a flour in Africa and the Caribbean. It’s gluten-free, grain-free, and vegan. As it’s made from green bananas the resulting flour is lower in sugar and it has a neutral, mild flavour (i.e. it won’t make everything taste like banana bread). This flour is packed with fibre, potassium, and magnesium and is a source of resistant starch, which helps to foster the beneficial bacteria in the digestive tract and helps balance blood sugar levels.

Where To Buy Green Banana Flour

Tigernut flour is made from tigernuts, which are not nuts but small tubers. Tigernut flour is gluten-free, grain-free, nut-free, and vegan. Like other tubers, tigernuts are on the sweeter side so when you use the flour in baking you may be able to reduce the amount of sugar depending on your palate. Like green banana flour, tigernut flour is rich in fibre and resistant starch, and it’s a flour commonly used in Autoimmune Paleo diet (AIP) protocols.

Where To Buy Tigernut Flour Before you ask, I am happy to share that I did try this recipe with a few different flour combinations in place of green banana and tigernut and all worked. The one thing I kept consistent was the arrowroot starch and psyllium and I recommend you do the same. This recipe was pretty forgiving and with different flours, baking time, and water amounts may vary slightly so have fun playing.

And so, here is the recipe for delicious and dangerously addictive gluten-free crispy crackers. 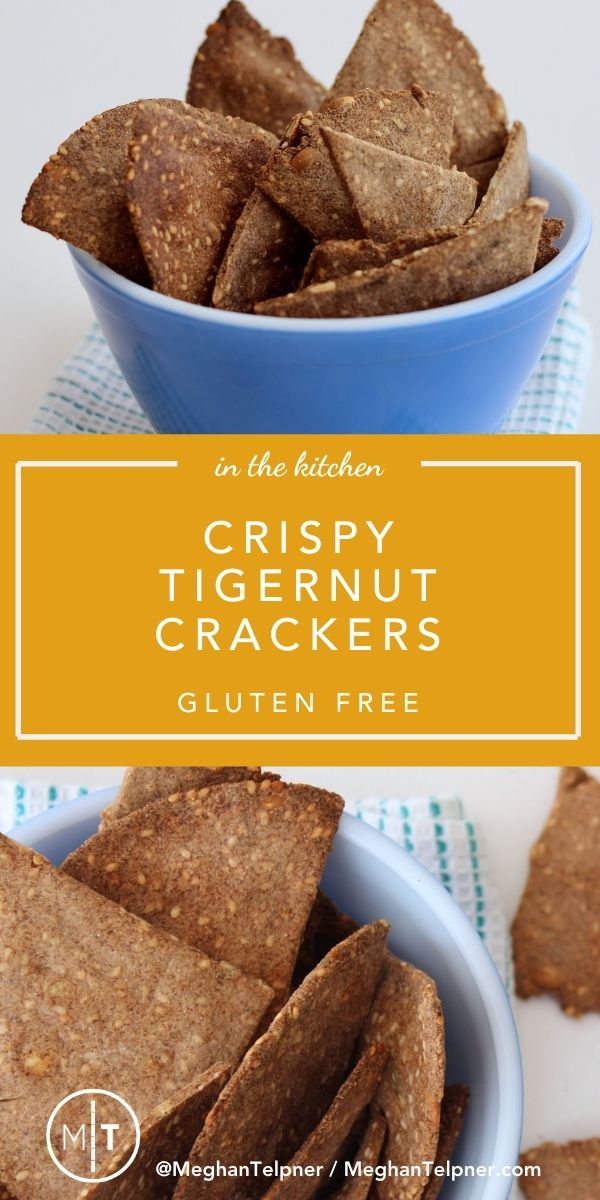