Sign up to receive news, updates and special offers through our newsletter.
Home > Blog > The Soylent Killer

2017 Update: Oh Soylent. You started out with a fight as the founder declared Soylent the future of food, or maybe it was supposed to be the end of food as we know it? This post was first published in 2014 when Soylent hit the scene with a ridiculously and unfortunately, very successful Kickstarter. Soylent has since faced numerous recalls as Soylent drinkers have faced everything from digestive upset to grey diarrhea, all the way to hospitalization from aggressive vomiting due to one of their new products that was affectionately named “The Barf Bar”. Nice. Send some over. Since publishing this post, I have been interviewed by the Globe & Mail, The Toronto Star and numerous publications from around the world — from France to Japan.

That’s not all. Since I posted the below, declaring Soylent not really food, there have been numerous Reddit feeds formed around criticizing my credentials. It’s a curious approach when all I have done below is outline how Soylent is not an adequate meal replacement because its component parts aren’t really what we might consider ‘food’. Effective October 26th, 2017, it seems the Canadian Food Inspection Agency agrees with me. What makes up Soylent are ingredients that have macronutrient value, but no one would ever elect to eat any one of its ingredients on its own. Soylent is not the future of food. Instead it exemplifies the epitome of laziness and self-care, and millennials should be offended that this is all what Mr. Rhinehart thinks you are worthy of, or capable of eating.

Have you heard about this “Soylent” beverage that’s been working its way around the internet?

I would have never known about this toxic beverage if the design team who built the first bit of our Academy of Culinary Nutrition website hadn’t asked me about it.

We aren’t talking about Soylent Green, although the barf factor of this version is similar to the corpse-based original. Soylent is a food substitute designed to supply all of the human body’s nutritional needs. Apparently.

While some sources claim that Soylent isn’t meant to replace food altogether, the marketing campaign sure seems to imply it. Thanks to my looking into this product, all I’m getting on Facebook are ads that say: “What if you never had to worry about food again?”

I’ll take my “worries” about trips to the farmer’s market and days playing in the kitchen over chugging back a chemical-based beverage three times a day, thank you very much. If I never had to think about food again, then I’d be worried!

After tens of thousands have been raised essentially sight unseen, the Soylent boys have finally posted nutritional information. 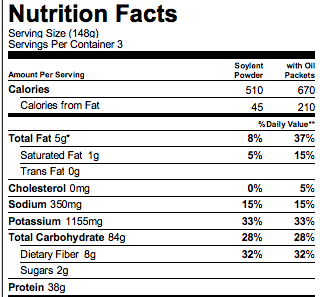 Let me break this down for you!

Maltodextrin, the first ingredient on the list, is an artificial sugar that is derived from either wheat or corn, with corn being the standard in the United States. Unless otherwise specified, the maltodextrin is likely coming from GMO corn with all the associated health risks.

What some may consider a winning point on maltodextrin is how absorbable it is (like straight glucose). And this is exactly the main problem – the sugars that absorb rapidly will also spike the blood sugar, increase insulin secretion, followed by a cascade of stress hormone release that all serve to increase inflammation in the body and reduce our capacity to deal with the world in a sane way. No joke. One of the best quotes I found about maltodextrin: “While wheat-derived maltodextrin may cause concern for individuals suffering from gluten intolerance, maltodextrin is such a highly processed ingredient that the majority of the protein is removed, rendering it effectively gluten-free.” Um. Great? Get empowered! Enjoy this directory of Healthwashing resources that will empower you to understand food labels. Learn More

The ingredients listed may technically meet 30% and 40% RDA levels, but are they affecting blood levels in our body? The forms of nutrients listed are the least absorbable and least bio-active, meaning, in plain English, the body won’t have a clue how to use them.

For example, Soylent uses vitamin D2 (as ergocalciferol) which has poor conversion into the active form vitamin D in the body and studies have shown it be harsh on the kidneys. The active form of Vitamin D is actually D3 (cholecalciferol), which can be readily used. These isolated nutrients with low absorbability potentially become toxic to the organs that need to filter through this garbage, namely the liver and the kidneys. Much like Ensure, they are simply using the cheapest forms of each vitamin. You get what you pay for. If you are interested in learning more about the various types of nutrients that can be found in vitamins and vitamin enriched foods, click here.

Soy lecithin has been found to be extremely estrogenic. That means it functions like estrogen in the body and can cause hormonal imbalances. So while all these dudes are sipping on their Soylent while gaming, they could also potentially be shrinking their junk and growing breasts. It’s a thickening agent and emulsifier and, unless specified otherwise, it likely comes from genetically modified soybeans. GMO foods have been linked to allergies, liver problems, infertility and sterility, breast cancer, thyroid disorders, kidney stones and more.

Gum arabic can cause gas, bloating, nausea and loose stools. It’s a stabilizer that’s used to give processed foods their long shelf life and is commonly used in soft drinks.

Vanillin is a cheap substitute for vanilla that comes from — wait for it — a beaver’s ass. Literally. As in, “the exudate from the castor sacs of the mature North American beaver.”*

Correction: As many Soylent fans pointed out – Vanillin doesn’t in fact from Beaver bum sac, that would be straight up Vanilla, Vanilla Flavour and/or Natural Flavour. What actually is found in Soylent is Vanillin which is either derived from wood pulp or synthesized in a chemistry lab. Our apologies for this misrepresentation.

Sucralose is not food. It is an artificial sweetener (read: fake chemical mess) with a looooong list of studies cataloguing its health risks. Here’s just a few: “In rats, sucralose alters the microbial composition in the gastrointestinal tract (GIT), with relatively greater reduction in beneficial bacteria.” In that same study, researchers found that cooking with sucralose at high temperatures resulted in a potentially toxic class of compounds, and that sucralose may alter glucose, insulin, and glucagon-like peptide 1 (GLP-1) levels in both humans and rats. Researchers in this study dubbed sucralose “not a biologically inert compound.” No kidding. Read more on artificial sweeteners here.

Like corn and soy, canola oil is most likely genetically modified unless otherwise specified. When choosing your oils, you have to ask yourself – does this oil come from a naturally oily source? Olives, coconuts, butter — oily. Canola? Not so oily. That means a heck of a lot of processing needs to happen in order to turn canola into oil. Plus, a 2009 study found that canola oil shortens the life of stroke-prone spontaneously hypertensive rats. Not exactly something I would choose as my primary source of fat. This omega 6 oil is highly pro-inflammatory in the body.

I can support supplementing with high-quality fish oil for omega-3 benefits when it’s from a very clean and purified source, but just how high-quality is the fish oil going to be in a mass-produced beverage? We’re not sure which fish this oil is coming from, but we wouldn’t want to eat them. Rancidity amongst fish oil, even some quality brands, is very common. To avoid this, many commercial brands add more preservatives to lend some shelf life to an oil that is naturally sensitive to heat, light and oxygen. Think chemical fish juice storm.

It’s completely understandable to want to simplify your meals. This beverage, however, is not an option – unless maybe you are in outer space and all your freeze dried food has been consumed and this is the only thing you have left. But then again, with this much starch, artificial sweetener, gums and emulsifiers, it may be best not to consume potentially diarrhea-inducing food in space.

Eat real food! There is nothing more important in your day than what you choose to fuel your life with. It will impact every other facet of your day and subsequently, the quality of your life.

Make your own meal replacement with a high speed blender, some spinach, some protein powder, a banana and some blueberries. It doesn’t get much easier (and healthier) than that.

Make your nutritious smoothies for the week all in one go!

Update August 11 2014: We have been informed that Soylent recently put a hold on shipping after recipients complained about flatulence and headaches after consuming the product. They have recently begun shipping it again, along with advice for “optimizing the Soylent experience” which includes avoiding using it as your main source of food without giving your body time to “adjust.”

Update August 26th, 2017: The Canadian Food Inspection agency has notified Soylent that its “meal replacement” products do not actually meet the requirement of what food actually is. The product has not been recalled in Canada, but shipping into the country has been halted until Soylent meets the requirements. I am not sure how they plan to make maltodextrin, the primary ingredient in their mix, into food, but they’ll figure something out to ensure the grey diarrhea can go on. Read more here.

47 responses to “The Soylent Killer”